African Catholics Defend Tradition On Gays And Divorce, Less So On Economics And Politics 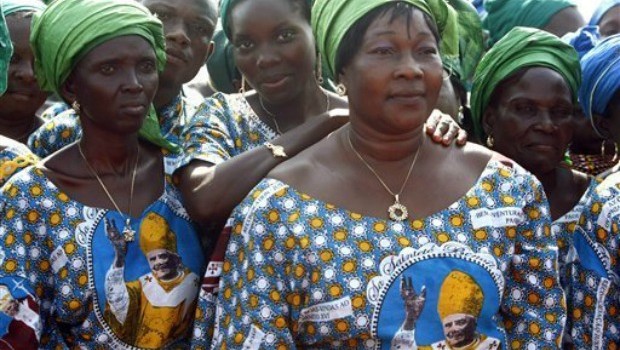 African Catholics oppose what they consider an excessive focus on divorce and homosexuality during the synod — underway at the Vatican — but they are more liberal on economic and political matters, according to a report in the WallStreetJournal.

More than 250 bishops from around the world including 54 Africans are in Rome to discuss the Catholic Church’s approach to a range of family issues. The issues getting the most attention are proposals for a softer line on gay Catholics and eligibility of divorced, remarried Catholics to receive Communion.

Pope Francis’ criticisms of the world’s financial system and capitalism resonate powerfully with Africans, according to Francis X. Rocca, writing for the WallStreetJournal. At the synod, Africans are pushing for more attention to problems such as the stresses that migration places on families, violence against women and families headed by children orphaned by HIV/AIDS.

But when it comes to debating possible changes in the church’s approach to homosexuality and divorce, Africans are firmly defending tradition, according to the report.

Since 1980, the number of Catholics in Africa grew by 238 percent, according to the report, “Global Catholicism: Trends & Forecasts.” Globally, the proportion of the population that is Catholic has remained steady at about 17.5 percent for the last 50 years, CatholicHerald reported.

Not all Africans are unmovable on family questions, WSJ reports. South Africa is the only country in Africa where same-sex marriage is legal.

Archbishop Charles Palmer-Buckle of Accra, Ghana, said African attitudes toward homosexuality could eventually change, and he is in favor of letting some divorced, remarried Catholics receive Communion.

“Give the countries time to deal with the issue from their own cultural perspective,” the archbishop told reporters at the Vatican last week, according to the WallStreetJournal. “Be patient with Africa; we’re growing.”

Africans have emerged as the standard-bearers for conservatives defending traditional Catholic teaching on family issues, according to the report. One conservative Catholic magazine ran an article in September entitled, “The Africans Will Save the Synod, the Church and the World.”

Pope Francis will visit Africa in November and he has said the church must find ways to welcome gay and divorced Catholics. He could find it tough to liberalize in the face of opposition from many African bishops and other conservatives, WallStreetJournal reports.

“He’s the pope who’s all about unity and reconciliation, and as much as he might favor certain changes, I don’t think he feels he has the consensus he needs,” said R. Andrew Chesnut, a professor of Catholic studies at Virginia Commonwealth University. “The dynamism lies in Africa and Asia, and any of those types of major reforms really have the potential to alienate the Africans.”

African bishops, most from sub-Saharan Africa, overwhelmingly oppose allowing divorced Catholics who have remarried to Communion, arguing that marriage is for life and the admission would weaken the church, according to the WallStreetJournal.

Some African bishops say their conservatism has cultural roots.

Some African countries have strong anti-homosexuality laws, and African bishops have opposed any softening of church language on same-sex marriage or homosexuality. A document submitted by the bishops to the synod this year says that homosexuality is rare in Africa.

Germans have been at the forefront in pushing for the church to adopt more conciliatory language toward gays and allow divorced, remarried Catholics to Communion.

“(African bishops) should not tell us too much what we have to do,” Kasper told a reporter in 2014, WSJ reported. “Africa is totally different from the West…especially about gays. We say we ought not to discriminate…You can’t speak about this with Africans and people of Muslim countries…it’s a taboo.”

Philadelphia Archbishop Charles Chaput praised the authority of Africans as leaders in a region where Catholicism is growing fastest.

Cardinal Thomas C. Collins of Toronto said the African church “is probably healthier than other parts of the church.”