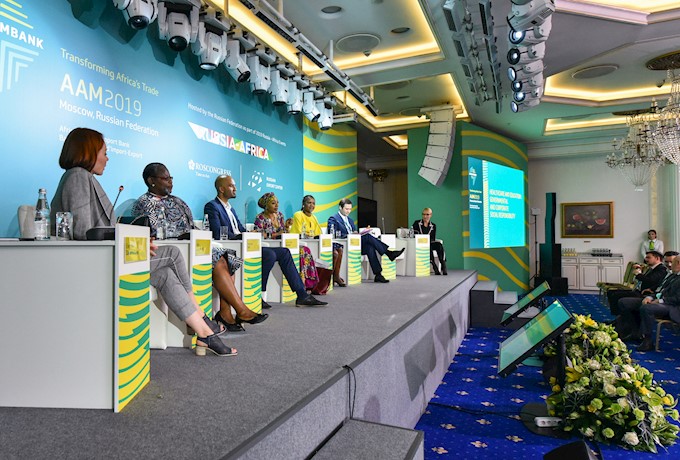 Squeezed between European and American sanctions, Russia has stepped up efforts to raise its existing relationship, mostly focusing on trade, investment and economic cooperation with several African countries.

The latest additional step taken in propelling trade and investment partnership efforts was an open Economic Conference held within Afreximbank Annual Meetings from June 20-22 in Moscow. The organizers of the economic conference and other Russia–African events in 2019 have described as truly the Year of Africa for Russia.

The Afreximbank Annual Meetings also included Seminar and Meeting of the Afreximbank Advisory Group on Trade Finance and Export Development in Africa and special meetings between Russian and African political and business leaders to discuss trade, industrialization, export, and the implementation of joint investment projects.

Due to multiple factors such as untapped abundant natural resources, improvement of the business climate, the rise of the middle-level income class and economic growth, Prime Minister Dmitry Medvedev noted in his speech at conference, and further pointed to Africa’s growing appeal to high-tech, telecom investors and other consumable products which could have business connection with Russia.

“All these things have already made Africa attractive for investments, and not merely in producing industries but, which is of particular importance, in high technologies and telecommunications,” Medvedev said.

According to certain estimates, about a half of the resource potential of the planet is in Africa, he argued: “we therefore need to more efficiently use these resources and at the same time promote cooperation in this sphere, just like cooperation in other spheres.”

Besides those factors, there is high desire for mutual-cooperation. “It is also important to have a sincere internal desire, and such a sincere desire is present from the side of the Russian Federation and from the side of African states. We see this at different levels, including the top levels of cooperation,” Medvedev said.

Opening the conference, which attracted more than 1,500 delegates, Foreign Minister Sergey Lavrov reminded conference participants that while relying on the long-time accumulated experience of constructive partnership, Russia and Africa are confidently moving along the road of comprehensively expanding Russian-African ties.

According to the Foreign Minister, the long years of solid friendship, which has been created, gives a fresh impetus to cooperation in many spheres and provides necessary conditions for building up trade, economic and investment exchanges, as well as cooperation in banking, and for encouraging business communities to implement mutually beneficial projects in African countries.

These include the construction of the country’s first nuclear power plant and the establishment of the Russian Industrial Zone in Egypt, as well as the projects that are being implemented in Africa by such leading Russian businesses as Rosneft, Lukoil, Rosgeo, Gazprom, Alrosa, Vi Holding, GPB Global Resources and Renova.

“We can report first achievements in this sphere. Mutual trade is growing – it exceeded US$20 billion last year – and becoming more diversified. Large projects are being implemented in Africa with direct financial support from Russia,” he assertively said, and added: “I am confident that cooperation with Afreximbank, which the Russian Export Centre (REC) has joined as a shareholder, will help promote long-term trade and economic relations between Russian businesses and their African partners.”

As expected, REC predicts the volume of Russian-African trade relations will double within the next 3-4 years. “The Russian Export Center maintains a close partnership with Afreximbank and has already entered the first deals that we are jointly implementing on the African continent. We intend to increase the volumes and we foresee the volume of the Russian-African trade ties in the next three to four years doubling,” said the Russian Export Center’s (REC) chief Andrei Slepnev.

“It goes without saying that the Russian Export Center sees the African region as an important area to promote Russian non-commodity export. Our objective is to use today’s positive market environment to open the access to African markets to as many exporters as possible and expand our geography,” he argued.

The African continent currently has enormous potential as a sales market. Many African countries are enacting economic reforms, demand is growing for high-quality, competitive products. Russian businesses are interested in this niche, and our goods are already competitive in terms of price and quality.

Basic financial instruments of supporting trade between Russia and Africa could be direct loans to foreign buyers (including those secured by the sovereign guarantee of the borrowing country) and loans to banks of foreign buyers under the insurance coverage Exiar, loans to sovereign borrowers, financing receivables against export earnings.

In 2018, for instance, the volume of export-supported Russian products to African countries amounted to US$2.47 billion. The main partners are Egypt, South Africa, Zambia, Morocco, Algeria, Nigeria and Kenya.

Advisor to the President of the Russian Federation, Anton Kobyakov, noting the importance of multilateral cooperation between Russia and Africa: “The current situation in the world is such that we are witnesses to the formation of new centres of economic growth in Africa. Competition for African markets is growing accordingly. There is no doubt that Russia’s non-commodity exporters will benefit from cooperating with Africa on manufacturing, technologies, finances, trade, and investment.”

Afreximbank President and Chairman of the Board of Directors, Dr. Benedict Okey Oramah, presented the 2019 African Trade Report, an analytical survey of African trade.

“As we gather in this historic city of Moscow, we will explore how we can shape the future of trade and how we can transform our continent,” said Oramah. “Our collective endeavours will impact the economic future and wellbeing of Africans for generations to come.”

In 2017, the Russian Export Center became Afreximbank’s third largest non-African financial institution or organization shareholder, which has allowed for the rapid acceleration of investment, trade, and economic relations between Russia and African countries. It’s active in mining projects in Zimbabwe and Sierra Leone, and has expressed interest in attracting Russian partners to the implementation of projects in the oil industry in Africa.

Notable among the Russian-African foreign economic projects include the signing of a memorandum of cooperation between the REC and Joint company Afromet (Vi Holding) regarding the comprehensive development of the Darwendale platinum field project in Zimbabwe, which was signed during a visit by the President of Zimbabwe, Emmerson Mnangagwa, to the Russian Federation in January 2019.

According separate reports obtained by Indepth News, Russia has been developing a number of projects in cooperation with Afreximbank, including a project concerning the shipment of Russian ground transport and projects to finance industrial infrastructure construction and modernization projects in Nigeria and Angola. At the end of 2018, REC, Russian Railways, and Afreximbank signed a memorandum of cooperation. As a result, a trilateral working group was created, tasked with studying export and investment project issues in the railway and related industries, as well as forms of project and investment financing.

The latest description of Africa, which consists of 54 states, to many experts and business investors, is the last frontier. It is the last frontier because it has huge natural resources still untapped, all kinds of emerging business opportunities and constantly growing consumer market due to the increasing population. It has currently become a new business field for global players.

That negative perceptions deeply persistent among political and business elite, middle class and the public towards Russia. For the two past decades, due to Russia’s low enthusiasm, lack of coordinated comprehensive mechanism and slowness in delivering on skyline investment pledges have been identified as the key factors affecting effective cooperation between Russia and Africa.

London based Business Research and Consultancy firm published a new report about global players set to continue broadening economic and business engagement across Africa. The publication has become largely important as Russia with its recognizable global status and among BRICS (Brazil, Russia, India, China and South Africa) dominated headlines that it has played less visible role in sub-Saharan Africa after Soviet’s collapse.

The Russian Export Center, as a state institution for the support of non-primary goods, providing Russian exporters with a wide range of financial and non-financial support, is also working on a number of projects with Afreximbank in various African regions.

Afreximbank was founded in 1993 in Abuja, Nigeria, with the authorized capital of US$5 billion. The main objectives of the bank are the development of trade between African countries and abroad. The banks’ headquarters is located in Cairo, Egypt. *Kester Kenn Klomegah writes frequently about Russia, Africa and the BRICS.