The 30th edition of the Africa Cup of Nations will kick off on Saturday, with organisers, players and fans hoping the tournament can thrive in the face of adversity.

It was only in November that Equatorial Guinea took over as hosts from Morocco, whose plea to postpone the finals over fears about the spread of Ebola was rejected by the Confederation of African Football (Caf).

With concerns over the short time for Equatorial Guinea to prepare, worries about potentially poor attendances at matches in remote parts of the country and doubts about the infrastructure and facilities, football itself has taken a back seat in the build-up to the 16-team, 17 January to 8 February event.

BBC Sport looks at the on main issues surrounding the continent’s football showpiece.

It is not the first time the small, oil-rich central African state of Equatorial Guinea, with a population of just 740,000, has hosted the tournament – they did so jointly with Gabon in 2012. However, the extra burden of going it alone, and at such late notice, is weighing heavily.

Matches will be hosted in four cities; Bata and Malabo – as they were three years ago – and in Mongomo and Ebebiyin. The new venues will be relatively basic because there has been insufficient time to build better facilities in those towns. 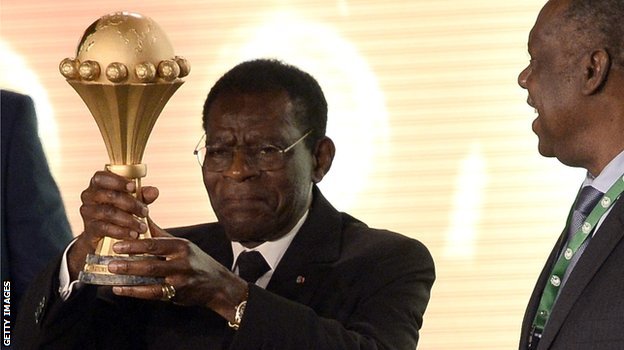 The stadium in Ebebiyin has a reported capacity of only 5,000. Even so, there is a real chance of it not being filled – one of the 2012 Nations Cup matches hosted by the country was attended by a tiny crowd of 200 people.

It is that kind of statistic which has moved the country’s president Teodoro Obiang Nguema to personally pay for 40,000 tickets for fans to attend matches.

“We have to buy tickets to fill stadiums,” said Nguema. “Let those who have the means help the poor.”

Additionally, the hotel capacity in the new host cities is minimal, making it a struggle for both media and fans to find accommodation and follow the tournament.

On the pitch, little is expected of the team, who were eliminated from the qualifiers when they were penalised for fielding an ineligible player – Cameroon-born Thierry Fidieu Tazemeta – in a match against Mauritania, only to be reinstated when they stepped in as hosts.

It would be the biggest shock in the history of the tournament if the “National Thunder” became the 12th hosts to lift the trophy.

Their chances of making any impact have not been helped by the fact their new coach, Argentine Esteban Becker, was appointed 11 days before the opening game of the finals.

Ebola – a shadow over the tournament

The deadly virus, which broke out in West Africa in March 2014 and has claimed the lives of 8,386 people in six countries according to World Health Organisation figures up to 12 January, has cast a dark shadow over the tournament. 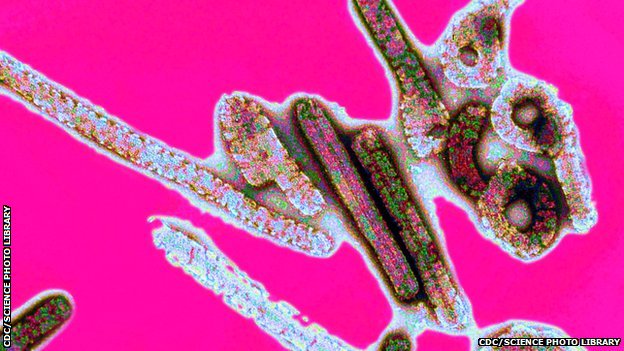 The Ebola virus causes a range of painful and debilitating symptoms

However, there are no reported cases in Equatorial Guinea and the country’s government has taken measures to prevent Ebola from reaching their soil, including hiring the expertise of a team of Cuban doctors.

All players and visitors entering Equatorial Guinea will be tested for Ebola.

Julia Nchama Abeso Avomo, the administrative attache at the country’s embassy in London, said everyone entering Equatorial Guinea will go through a short medical check upon arrival as a precautionary measure.

Guinea, Sierra Leone and Liberia are the countries worst affected by Ebola. Guinea are the only qualifiers for the finals – and their achievement is remarkable given the circumstances.

The team were unable to play any matchers at home and also suffered because of the stigma of the disease.

Borussia Monchengladbach winger Ibrahima Traore says the players were tested for Ebola in the dressing room, just before a vital match against Togo.

“We felt disrespected in other countries; to us it was like some people were seeing us Guineans not as human beings but as a disease,” Traore told BBC Sport.

“Now we have to forget all that and we have to perform well in Equatorial Guinea. It’s something really important for our country and all the people who are suffering due to this disease.

“We want to show everyone a great image of Guinea.

“We got a $30,000 (£19,700) bonus for qualifying and I gave that money directly to charities fighting the disease. At the Africa Cup of Nations we want to fight for the people who are struggling due to Ebola.”

Favourites to win the trophy 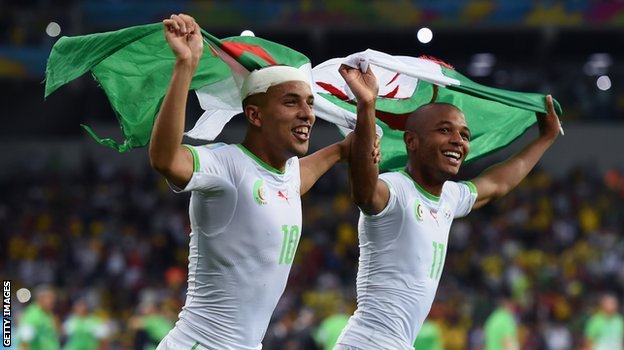 Algeria are the best team in Africa, according to Fifa’s global rankings,  and go into the tournament as many people’s favourites.

After an outstanding World Cup in Brazil last summer, when they reached the last 16 for the first time, the Desert Foxes won five of their six Nations Cup qualifying matches to top their group with ease.

However, they have probably the toughest draw at the finals, alongside Ghana, Senegal and South Africa in Group C.

And French coach Christian Gourcuff is wary of their favourites tag.

“There is quality in the team, but there are also conditions that we must get used to,” he said. “We disregard the judgments of others. We must guard ourselves from any excess of confidence. It would be a major mistake to listen to such predictions.”

Gourcuff is wise to be cautious, as few tournaments are as difficult to predict as the Nations Cup.

Burkina Faso, with no previous impressive Afcon history, made the 2013 final. Zambia won the title in 2012, beating Yaya Toure, Didier Drogba, Gervinho and Ivory Coast’s other big names in the final.

Ivory Coast and Ghana have long been regarded as Africa’s two most talented teams, but Ivory Coast have not won the title in more than 20 years and Ghana’s misery stretches to more than 30 years.

Two sides enjoying a resurgence are South Africa and Cameroon – both putting recent difficult spells behind them to find form and unity at the right time to go through qualifying unbeaten.

“I have told the players not to fear anybody because we have no reason to feel inferior,” said South Africa coach Ephraim Mashaba. 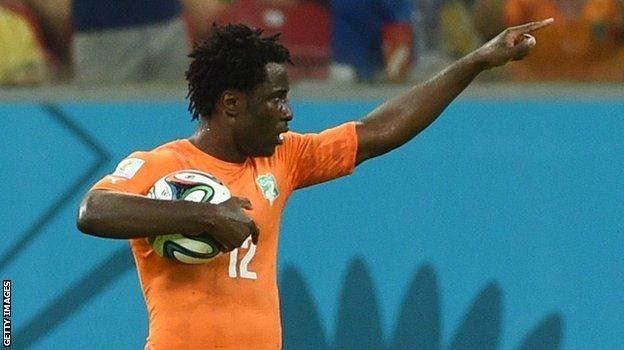 Four of the nominees for the 2014 BBC African Footballer of the Year award will be on show: the winner of that title, Yacine Brahimi, will be instrumental in Algeria’s bid for glory, Ivory Coast boast Yaya Toure and Gervinho, while Pierre-Emerick Aubameyang will spearhead Gabon’s attack.

Porto playmaker Brahimi was Algeria’s top scorer in qualifying and will be a goal threat, while he is also likely to provide assists thanks to his quick feet and eye for a pass.

Manchester City powerhouse Toure will be the driving force for the Elephants, who will also look to the skilful Roma forward Gervinho to shine as brightly as he did on the World Cup stage last summer.

The Ivorian ranks also contain striker Wilfried Bony, who has just become one of the most expensive African players in history after signing for Manchester City from Swansea for £28m. Fans will hope for pace, power and clinical finishing from Bony.

One lesser-known name to watch out for is Fabrice Ondoa, the teenage goalkeeper of Cameroon. The 19-year-old plays for Barcelona B and only made his debut for the Indomitable Lions during the Nations Cup qualifiers. He conceded just one goal in six games.

Algeria’s Brahimi will be hoping to celebrate his birthday in style by lifting the trophy on the day he turns 25.

There will be no successful defence of the trophy for Nigeria after theSuper Eagles failed to book their place at the finals. It was a big shock – and some would say a massive loss for the tournament.

Record seven-time champions Egypt also missed out – for the third time in a row.

And for the first time in over a decade, two of Africa’s biggest names and greatest strikers will be missing from the tournament.

Eto’o scored a record 18 goals at Nations Cup finals and hit 56 goals in total from 118 appearances for his country, while Drogba struck 65 in 104 matches for the Elephants. 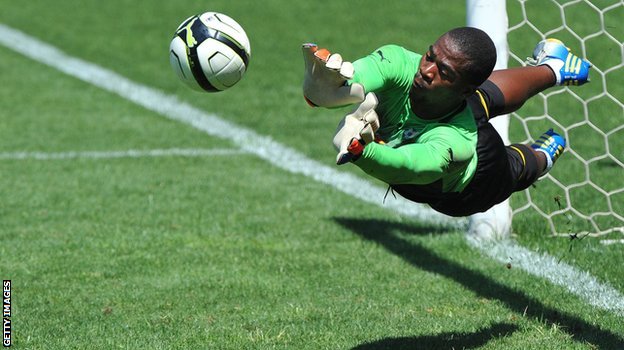 South Africa midfielder Dean Furman says the team will be trying to win the trophy to honour their goalkeeper Senzo Meyiwa, who was killed in October.

Meyiwa, the team captain, was shot after burglars entered his girlfriend’s house near Johannesburg.

Furman has now taken over the captaincy and will lead the team in Equatorial Guinea.

“Senzo was close to a lot of people, he was such a great character, always smiling, always lifting other people around him,” Furman told BBC Sport.

“When the news filtered through about the murder it was really just complete and utter shock. I remember talking to the boys, especially his team-mates at Orlando Pirates, and they were in utter devastation.”

“The first South Africa game after Senzo’s death was in his home town of Durban. It gave us a chance to pay our respects. We all went to the grave site and we visited Senzo’s family.”

“It is an incredible honour to be Bafana Bafana captain. Obviously it was in the worst circumstances but I’m hoping to continue in the footsteps that Senzo set us off in during the qualification campaign.

“We want to win it for Senzo.” 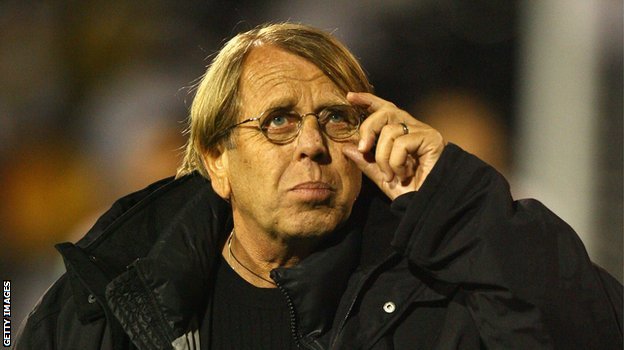 Frenchman Claude Le Roy will coach at the Africa Cup of Nations for a record eighth time. This time the 66-year-old is in charge of Congo, the fifth country he has led at the finals.

He won the tournament with Cameroon in 1988, having finished runners-up with them two years previously, he came third with Ghana in 2008 and was a semi-finalist with Senegal in 1990.

Only once – in the last edition of the tournament, as coach of DR Congo – has he failed to reach the quarter-finals.

His chances of success this time are limited, as Le Roy himself acknowledges.

“We are the only team who does not have a single player who has taken part in the Cup of Nations before,” he said. “They were all children the last time, But we are lucky to be able to take part in the opening game.”

Congo face hosts Equatorial Guinea in the first match on Saturday, and will also face Burkina Faso and Gabon in Group A.

Exuberant fans and protests over selections

In Guinea, young supporters marched in the capital Conakry and erected barricades on the streets in protest after one of their favourite players, midfielder Sadio Diallo, was left out of the squad. But their efforts went in vain as the midfielder, who plays for French club L’Orient on loan from Rennes, will not participate at the finals.

Crowds in Equatorial Guinea are likely to be small but expect many of the fans who do attend to wear colourful dress and painted faces, give vocal support and revel in what is, for many, the only chance they get to see their team have a chance at international glory.