The tournament was initially scheduled to be hosted by Morocco, who previously hosted it in 1988, but Morocco refused to host the tournament at the scheduled dates because of the Ebola Virus Epidemic in West Africa The host country was later changed to Equatorial Guinea.

CAF received 3 bids before 30 September 2010, the deadline, to host either the 2015 or 2017 Africa Cup of Nations from DR Congo, Morocco and South Africa. All three bids were originally put on a short list. However, Morocco was considered to be the most favorite to host the competition because of its highly developed infrastructure and advanced stadiums.[citation needed] CAF then began an inspection procedure, on November and December 2010, intending to visit each bidding country to view stadiums, infrastructure, and football interest. They inspected the DR Congo first. Shortly after the inspection, DR Congo informed CAF that they would be withdrawing their bids for both the 2015 and 2017 Africa Cup of Nations tournaments. Morocco was the next country to be inspected. South Africa was inspected last.

On 29 January, during the 2011 CAF Super Cup, the CAF Board decided that Morocco would host the 2015 African Cup of Nations. The four Morocco host cities which were scheduled to host the tournament were Rabat, Marrakesh, Agadir and Tangier, as announced by the CAF Executive Committee on 23 September 2013.Casablanca would serve as an alternative venue.

In October 2014, the government of Morocco requested a postponement of the tournament due to the Ebola virus epidemic in West Africa. After the matter was discussed at the Executive Committee meeting on 2 November 2014, CAF decided to keep the date of the tournament, while also asking for a clarification from the Royal Moroccan Football Federation of whether they still wish to host the tournament. On 8 November, Morocco failed to meet this deadline to confirm it would host the tournament. Three days later CAF confirmed that Morocco would not host the tournament and a new host would be chosen from a list of countries which have expressed interest. Morocco, who had previously qualified as hosts, were disqualified from participation at the tournament. CAF confirmed legal action against Morocco due to a contract signed in April 2014. Moroccan Sports Minister Mohamed Ouzzine said that CAF had falsely accused his country of “refusing” to host the tournament when it wanted it postponed, and justified the decision by citing that the World Health Organization gives every country the right to protect its citizens.

Egypt, Ghana, South Africa and Sudan all declined to take over as hosts. Angola, the hosts of the 2010 edition, were spoken of as a potential replacement due to existing stadia and infrastructure in the country. However, a member of the Angolan Football Federation stated that it could not be possible as the new government budget did not include any tournaments.

On 14 November 2014, CAF announced that Equatorial Guinea would host the tournament.

51 teams entered the tournament (excluding initial hosts Morocco). It was the competitive debut of South Sudan. Teams of Djibouti and Somalia declined to enter.

Morocco would have automatically qualified as hosts; however, after their refusal to host, they were expelled from the tournament by the CAF. Equatorial Guinea was chosen as the new host, and despite having played in the qualifiers and been disqualified due to fielding an ineligible player, they now qualify for the tournament automatically.

The defending champions Nigeria failed to qualify for the tournament.

Only the hosts will get an automatic qualification spot, the other 15 teams will qualify through qualification tournament. At the finals, the 16 teams will be drawn into four groups of four teams each. The teams in each group play a single round robin. After group stage, the top two teams from each group will qualify for the quarterfinals. The quarterfinal winners will advance to the semifinals. The semifinal losers will play in third place match, while winners will play in final.

The following referees were chosen for the 2015 Africa Cup of Nations.

Each team can register a squad of 23 players.

The group winners and runners-up advance to the quarter-finals.

The teams are ranked according to points (3 points for a win, 1 point for a draw, 0 points for a loss). If tied on points, tiebreakers are applied in the following order:[28] 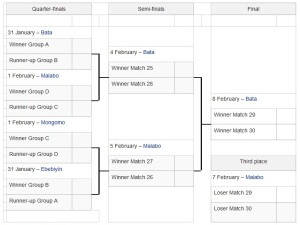 The new Adidas Africa Cup Ball is called Adidas Marhaba (that means Welcome) – The Africa Cup 2015 Ball was unveiled today following the controversy about the host situation for the 2015 Africa Cup of Nations.