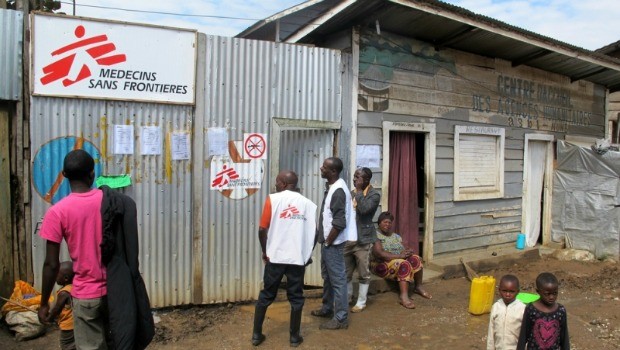 As our hearts go out to Paris and France, recently attacked by anti-Semitic hijackers of Islam and the world, it’s comforting to honor a French-born organization that helps heal the world.

During the Parisian strikes and protests of May 1968, a group of young doctors decided to go and help victims of wars and major disasters.

The volatile period of civil unrest was considered a social revolution in France. “May 68″ became known as a turning point in the country, and Africans are benefiting today.

The founding group of doctors become Médecins Sans Frontières or Doctors Without Borders. Their new brand of humanitarianism re-invented the concept of emergency, according to MSF’s website.

Here are 12 things you didn’t know about Doctors Without Borders in Africa.

Doctors Without Borders In Africa

Doctors Without Borders has been active in a large number of African countries for decades, sometimes serving as the sole provider of health care, food, and water. Although the organization consistently tried to increase media coverage to increase international support, long-term field missions are still necessary. The tragedy of the 2014 Ebola outbreak in Africa succeeded in making Doctors without Borders a household name.

Doctors Without Borders and HIV/AIDS

Africa — and the world — sees the most cases of HIV/AIDS in sub-Saharan Africa. Treating and educating the public is a major task for volunteers. Of the 14.6 million people in need of anti-retroviral treatment, the World Health Organization estimated that only 5.25 million people were receiving it in developing countries. Doctors Without Borders continues to urge governments and companies to increase research and development into HIV/AIDS treatments to decrease cost and increase availability of treatment that can save lives.

Doctors Without Borders in Congo

Although active in the Congo region of Africa since 1985, Doctors Without Borders had to evacuate its teams due to extreme violence, but continues to work in some areas to provide food to tens of thousands of displaced civilians, as well as treat survivors of rapes and widespread fighting. The organization also provides treatment and vaccination against diseases such as cholera, measles, polio, Marburg fever, sleeping sickness, HIV/AIDS, and bubonic plague to prevent or slow down epidemics.

Doctors Without Borders in Uganda

Doctors Without Borders has been active in Uganda since 1980, and provided relief to civilians during the country’s guerrilla war. There has been a long campaign of violence in Northern and Southern Sudan. Civilians were subjected to mass killings and rapes, torture, and abductions of children, who would later serve as sex slaves or child soldiers.

Faced with more than 1.5 million people displaced from their homes, Doctors Without Borders set up relief programs in camps to provide clean water, food and sanitation. Diseases such as tuberculosis, measles, polio, cholera,Ebola, and HIV/AIDS occur in epidemics in the country, and volunteers provide vaccinations or treatment.

Mental health is also an important aspect of medical treatment for Doctors Without Borders in Uganda, since many people refused to leave the camps for constant fear of being attacked.

Doctors Without Borders and Ebola

Since March of 2014, the organization shipped more than 1,400 tons of supplies to the affected countries.

The first recorded strain of Ebola virus appeared in 1976 in simultaneous outbreaks in Nzara, Sudan, and in Yambuku, DRC, according to Doctors Without Borders.

The Yambuku village in DRC was near the Ebola River. This is how the disease got its name.

Fruit bats are thought to be a natural host of the Ebola virus.

The fatality rates varies from 25 to 90 percent, depending on the strain. It is a highly infectious and causes terror in infected communities. Doctors Without Borders tried to help contain this disease.

Doctors Without Borders in Libya

Doctors Without Borders in Chad

Although the Chadian government promised to increase investment in healthcare, but quality of care is still poor, particularly for rural communities, children, and refugees. The mortality rate for children under 5 is high, and routine vaccination coverage is low. Death from malnutrition and preventable diseases such as malaria and cholera, are high, and disease epidemics recur. Instability in the surrounding countries also means Chad is host to a high influx of refugees. In 2013, some 60,000 new refugees arrived in the country, with urgent needs for basic and specialized medical care.

How a Doctors Without Borders mission is organized

A field mission team usually consists of a few coordinators heading each component of a field mission, and a head of mission — usually the person who has the most experience in humanitarian situations among members of the team. It is this person’s job to deal with the media, national governments and other humanitarian organizations.

Medical volunteers include physicians, surgeons, nurses, and various other specialists. In addition to operating the medical and nutritional aspects of the field mission, volunteers are sometimes in charge of a group of local medical staff and provide training for them.

Logisticians are often the most important members of a team. They are responsible for providing everything the medical component needs, from security and vehicle maintenance to food and electricity supplies. They may be engineers or foremen, but they usually also help set up treatment centers and supervise local staff. Other non-medical staff are water/sanitation specialists — are usually experienced engineers in the fields of water treatment and management — and financial or administration experts.

Doctors Without Borders and The Borgen Project

In 1999, Clint Borgen recognized the need for an organization that could focus U.S. political attention on extreme poverty. In 2003, after graduating from Washington State University and interning at the U.N., Borgen established the Borgen Project. It’s a U.S. national campaign that works with U.S. leaders to improve their response to the global poverty crisis.

Borgen collaborates with Doctors Without Borders in the Republic of the Congo and Ethiopia with medical attention is provided for the poorest areas of Africa.

Doctors Without Borders in South Africa

Doctors Without Borders has been in South Africa since 1999, consolidating its presence there by opening an office in Johannesburg. In South Africa the organization recruits medical staff and other professionals to work on projects around the world in addition to raising funds to support their international work.

In addition they support programs to raise awareness in South Africa by providing medical expertise including specific medical training for Doctors Without Borders field staff.

Doctors Without Borders and adherence clubs

Doctors Without Borders has pioneered approaches to treat HIV in South Africa since 1999, and these include adherence clinics.

The organization was one of the first providers of antiretroviral treatment in the public sector. It also helped decenetralize HIV treatment strategies and integrate tuberculosis treatment.

In Khayelitsha, the largest township in the Western Cape, Doctors Without Borders started antiretroviral treatment in May 2001, scaling up treatment to more than 20,000 people within 12 years. The organization managed to hand over almost all patients to the national health system. Today, Doctors Without Borders continues to provide support to clinics in Khayelitsha through mentoring and operational research on HIV and TB treatment, and pilots community-based treatment to relieve the burden on the strained health care system and on people living with HIV.

Adherence clubs are one of the things Doctors Without Borders does outside health facilities and in patients’ homes. Instead of attending one-on-one appointments at the health center, adherence club members go to meetings every two months for a check-up and drug refill, and to talk to other patients.

Doctors Without Borders analysis found that 97 percent of club members stay in care. The dropout rate is higher for non-club members: 85 percent for patients who qualified for club membership but remained in mainstream clinic care. By the end of 2012, there were 180 clubs, with more than 4,500 members at nine health facilities in Khayelitsha.

Doctors Without Borders and mobile populations

South Africa’s Musina project, in the Limpopo province near the Zimbabwe border began as an emergency intervention responding to xenophobic violence in 2007 but evolved into an innovative approach involving mobile clinics for asylum seekers and survival migrants scattered across a vast agricultural region.

Today, 500 farm workers have been put on HIV treatment and thousands more get primary health care which is otherwise largely inaccessible in the area.

Doctors Without Borders hopes that the adapted model of care for mobile populations such as farm workers will be adopted and adapted in other regions of the world with high burdens of mobile populations. The model includes a health passport, special counselling, drug supplies and a road map of antiretroviral drug clinics.