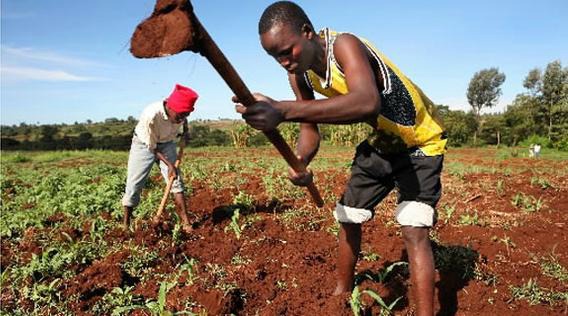 Africa is naturally blessed with lush forests, incredible wildlife, gorgeous mountains and beautiful waters. Nonetheless, its food and agriculture industries are suffering. You know this from the dozens of TV commercials you see asking for donations to help feed the residents of Africa, or to help organizations teach African farmers how to better farm their land.

Here are ten reasons why Africa’s agriculture sector is failing.

More than 75 percent of residents in rural African areas are full-time farmers. But the continent is so badly stricken by poverty, that people cannot buy the food at the rate the farmers are producing it. Some of the same people living in poverty who cannot afford to patronize farmers are farmers themselves. It’s a vicious cycle.

Even though farming is a popular profession in Africa, it is not popular among those who might be able to salvage it: the literate and those with advanced educations. Most Africans who have finished school and even done advanced studies, view farming as a “back-yard business” and won’t get into it, keeping to themselves precious knowledge that could bring money-saving and lucrative solutions to the industry.

The average African farmer is still working with manual tools like cutlass and hoes. Instead of adapting affordable, modern agriculture methods, most African farmers stick to the same practices they learned from their ancestors. One reason they aren’t updating their methods is simply because they don’t have access to them, or don’t even know about them.

An alarming number of farming communities in Africa do not have roads, so the drive to potential customers is extremely bumpy and a lot of produce is lost or destroyed along the way. Not to mention, transporting large tools or materials within the community is tedious and slow.

Many African farming communities don’t have electricity or modern water systems. That means no freezer, no refrigerator and no temperature control. This makes storing produce incredibly difficult and again, much of it is destroyed before it can make it to customers.

Lack of scientific and technological knowledge

Scientific and technological advancements in Africa are growing, especially in the mobile arena, but many farmers are still behind those of the Western world. Many schools don’t even have science labs or computers. This puts farming communities at a great disadvantage, since much of caring for and growing crops is scientific. Farmers sometimes lack basic knowledge on how to better their crops.

Any modern farmer today does a lot of his organization from a computer. Graphs, charts and even reminders are stored there. But most African farmers don’t have one, and have to do all their calculations and information storage in their own heads.

Africa lacks complete and updated documentation of citizens, properties, marriages, births and deaths. Within a farming community, this can make getting work done incredibly difficult. Farmers don’t always know when somebody has moved, changed a last name, or died.

Many of the food and agriculture industries in the West are now controlled by large conglomerates. Modern techniques and these conglomerates can lead to a food surplus, so other continents do not always need to purchase produce from Africa.

Global warming has led to forest destruction and over grazing of animals, making lands undependable. Many of Africa’s farmlands have become deserts with rivers, lakes and streams disappearing. And of course lack or rainfall coupled with poor irrigation techniques are destructive to crops.